Masters Degree students in the city and regional planning program at Georgia Tech generated this report in the spring semester of 2014. Their purpose was to investigate, How can the economic potential of the West End to raise the quality of life for its citizens be fully realized by improving transportation, land use, and the environment in the study area? 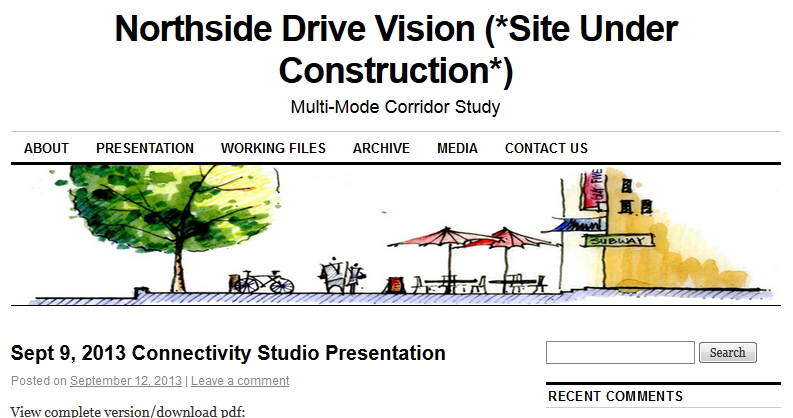 The work picked up from earlier studios that framed issues and made proposals that have begun to influence the policies and priorities for citizen groups, private sector interests, and government agencies. The first of these, www.northsidedrvision.gatech.edu, dealt with the Northside Drive corridor from I-75 to the West End. Its findings suggested that this corridor, long a dismal, utilitarian roadway, should be transformed into a grand transit boulevard, a gateway to the many strong institutions that line it and presently present a "back alley" character. The study further identified and analyzed the racial and class divide that Northside Drive has represented for decades. It suggested ways to replace the barrier with a seam, connecting low wealth neighborhoods to the west with the jobs and amenities of Downtown and Midtown to the east, both physically and programmatically. Finally, it identified West End as the logical terminus of the Northside corridor and suggested ways to realign the southern leg of Northside Drive to accomplish that goal. In that larger context, West End becomes the southwest hub of the Midtown/ Downtown core of the City, where most of its jobs, institutions, hospitality facilities, and cultural, entertainment, and sports facilities are concentrated.

The next studio, in the fall of 2013, focused on the midpoint of the corridor, the crossroads of Northside with Martin Luther King, Jr. Drive, the principle travel corridor for neighborhoods to the west of Downtown. The studio paid special attention to the development of a new, 1.2 billion dollar stadium for the Atlanta Falcons, replacing their current home next door. The principal issues picked up on the Northside divide between rich and poor, white and black, and explored ways in which the massive new investment might benefit the neighborhoods immediately impacted. Through considerable involvement with the neighborhoods and the Atlanta University Center (AUC), the students sought to support those groups' initiatives with planning analyses and findings that could add to the pressure on the City and the Falcons to do the right thing. These included suggesting ways to improve east-west connectivity, to develop job training and employment programs for local residents, to develop procurement programs that utilized local businesses, to improve travel and utility infrastructure, and to honor the national significance of the neighborhoods' history and culture. Related to West End, the AUC, the largest concentration of historically black colleges and universities in the country, became a critical focal point, the fulcrum through which Downtown and the West End connect. And the realignment of Northside Drive underscores that relationship as the frontage travel way for both AUC and the West End, along the way providing improved access between I-20 and Downtown.

The students of the CP 6052 Planning Studio would like to thank the following people for their assistance and valuable insight, which helped form the West End Hub Framework Plan: